Ever since I was a little girl, I was terrified of doctors and especially needles. I have vivid memories of going for my yearly checkup and locking myself in the bathroom, hiding from the nurse waiting outside to administer my finger prick. As I grew I was able to control my outward display of terror (I stopped kicking nurses and locking myself in the bathroom) but the terror was still alive and well internally. I would be lying if I told you I had never passed out at the doctor’s office. So, when I discovered I was pregnant with my first baby I was certainly elated that I was going to be a mother, but also terrified about what had to happen to get the baby out of me. I remember trembling with fear, positive pregnancy test in hand, as I thought about it.

As my pregnancy progressed and belly grew, I started to accept the fact that ready or not, birth was going to happen and became determined to make it a positive experience. My mother had three children with no pain medication, so why couldn’t I? I started to immerse myself in learning about birth and that is when I discovered HypnoBirthing. For the last third of my pregnancy, through the HypnoBirthing class my husband and I took together, I read and watched only positive birth stories, asked others to stop sharing their negative thoughts about birth with me, practiced relaxation, visualization and meditation techniques and learned about the body and how birthing muscles really work. I started to truly believe that I could do this without having to suffer. When my birthing day finally came, it was everything I hoped and prayed for and more. I had such a life changing, wonderful experience that a year later I became a doula and then went on to gain my HypnoBirthing educator certification. When I became pregnant with my second son I can honestly say I looked forward to experiencing the amazing and powerful process of giving birth again.

My second pregnancy was not fun…. at all. From the moment I found out I was pregnant the morning sickness began and continued for 18 weeks, once that subsided the SI joint pain kicked in and then a few weeks later it was confirmed that I had gestational diabetes again. I couldn’t wait to not be pregnant any longer. With my first baby, my labor began spontaneously 2 weeks before his due date, so I was hoping and praying this baby would do the same, but such was not the case. Our little Abram made me wait until just a few hours before my scheduled induction time to send my body the message that it was go time. But for all the beauty and joy that this second pregnancy lacked, it sure made up for it with my birthing experience.

As I mentioned, it was the night before I was scheduled to be induced when my labor finally began. Around midnight I woke up to the feeling of pressure from a surge (contraction), ignoring the sensation I drifted off to sleep. 20 minutes later I woke to the same sensation, again ignoring and drifting off to sleep. This pattern continued until around 2am when I decided I couldn’t sleep comfortably anymore and snuck downstairs in the early morning hours, careful not to wake my husband or toddler. I swayed on our birthing ball, laid on our couch and paced the living room while listening to my guided meditation track, focused on my breath and visualizing my birth color through each surge. I enjoyed this time alone, focused on the task at hand and feeling excitement in knowing that this was the real deal and I would soon be meeting my baby. After about an hour I noticed that my surges were in a very regular pattern, coming about every 4 minutes. I knew we would need time for my mother to come the house to watch our son before we left for the hospital, so I gave her a call. Next, I woke my husband to let him know what was going on. As we waited for my mother to come I took a hot shower. The water was soothing, I felt so relaxed, excited and comforted. Once I got out of the shower I called my doulas and told them to meet me at the hospital when they could.

When we pulled up to Winchester Hospital around 4:30am, my husband dropped me off to check-in while he parked the car. The men at the front desk asked me if I wanted a wheelchair to get to labor and delivery, but I didn’t need it. We slowly made our way up to the floor, pausing in the hall to sway through each surge. When we went through the doors of L&D they brought us right to our room and I got comfortable in the birthing gown I had brought from home. Only a few minutes later my doulas joined us and we all chatted excitedly, having fun. Honestly, they were a little skeptical that I was in active labor at all. As a doula myself, I knew there was definitely a right time to head to the hospital and call the doula. I had a feeling they may have thought that I was too early for it be that“right time”.  Then my nurse came in to do a cervical check to get a baseline of where I was. She asked me to guess how open (dilated) I was and I hesitantly said “4centimeters?” The nurse chuckled and said “you are 9 cms!” At that point the doulas knew that I had not gone to the hospital or called them too early!

As the next hour progressed my surges became more intense and I began to turn inward as I worked through each one. The sensation that I felt was intense pressure, but I can honestly say I never felt pain. I relied on my breath, my ability to relax my entire body, and the counter pressure from my doulas to remain calm and comfortable as my labor progressed. Sometime around 6:30am the nurse checked my cervix again and announced that was fully thin and open (effaced and dilated) and said I could begin pushing. At this point I was not feeling the urge to bear down, so I told the nurse that I would like to wait. I continued to work through my surges for the next hour and a half until suddenly I started to feel an increase in pressure and the slight urge to bear down. Working with my body I directed my breath through the back of my throat and visualized it gently pushing my baby out of my body and into my arms.  Just a few moments before my baby was born, my membranes released (water broke) and I felt a strong urge to bear down. After a few short breaths my beautiful, perfect Abe was born.

I was so grateful for HypnoBirthing and the tools that it gave me, allowing me to have such a beautiful and peaceful birthing experience. If you too would like to experience a beautiful and calm HypnoBirth, join me for our next 5-week series, starting this Monday.

Other posts by Mari Leckel 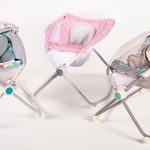 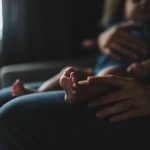